Workshop at the IEEE/RSJ International Conference on Robots and Systems (IROS)
Update: you can watch the entire workshop here! 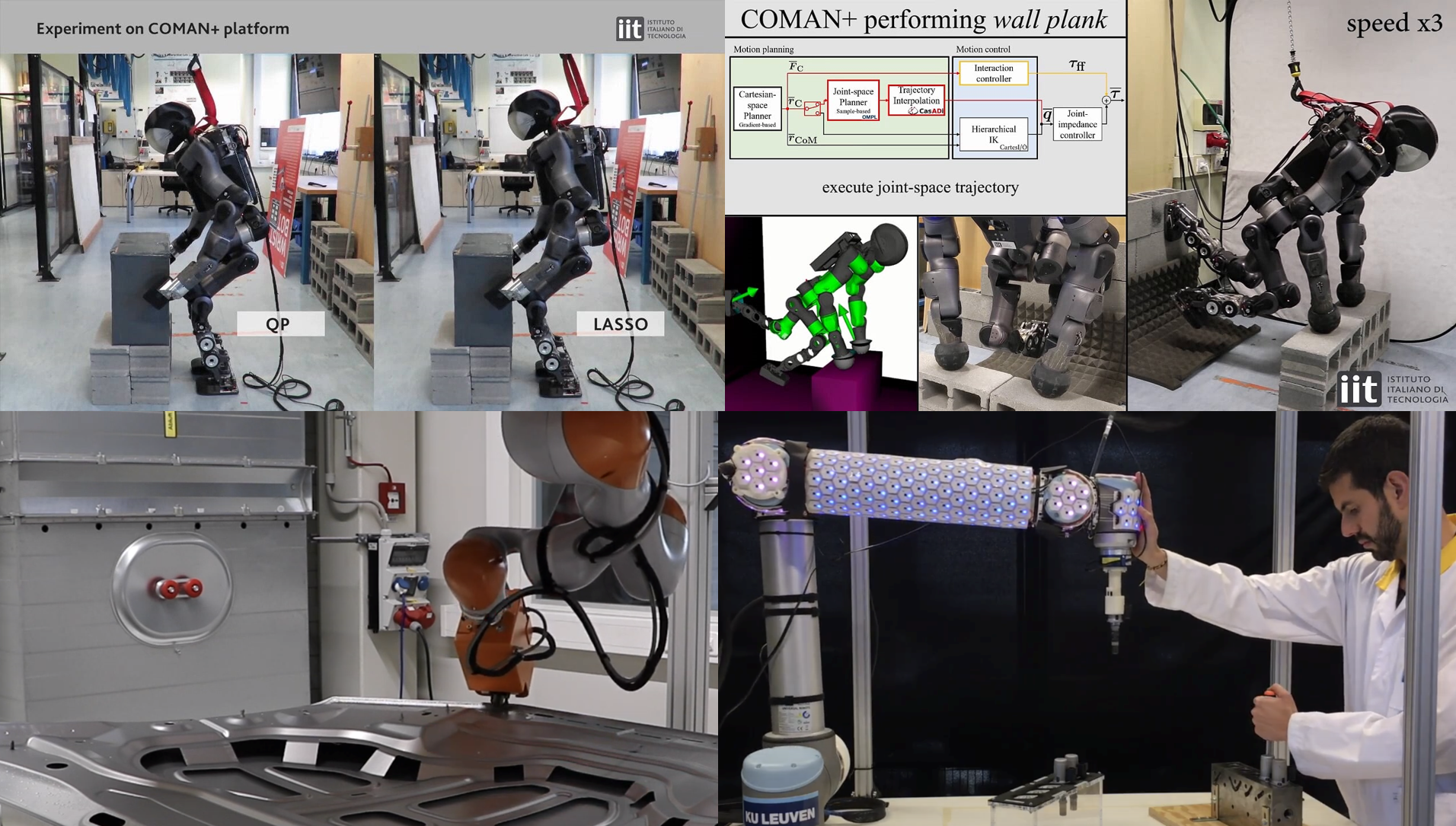 In robot programming, there is a big gap between academic experimental frameworks and the state-of-thepractice in industry. Widespread programming paradigms of industrial robot systems are built around a robot domain-specific language (like ABB RAPID, KUKA KRL, FANUC KAREL) that contain a motion stack with a set of primitives (e.g., MoveJ/PTP, MoveL/LIN) to interact with a real-time motion controller. The roots of these systems lie in the era of caged robots performing repetitive tasks with no or limited sensor interactions. Sensor-guided motions are typically added with special plugins/language extensions.

Nowadays, we want to deploy robot applications not only in highly conditioned production lines, but also in more human-like production lines with a large variability and uncertainty in the task, or production lines manipulating or processing natural products. Sometimes, we even want robots to physically interact with humans, jointly performing tasks. Defining and implementing how to react to disturbances (behaviour, skill) is key in these aspects, going beyond specifying a nominal prescribed trajectory execution. At the same time, we see that these applications typically consist of smaller production serie.  Development costs need to be written off against a smaller batch, leading to the need for decreased development costs. The central objective of this workshop is to identify how we can resolve these seemingly conflicting goals: on the one hand, we want to have complex sensor-based applications; on the other hand, we need to decrease development costs.

Constraint-based approaches, where the robot task is specified in terms of constraints, as opposed to traditional, trajectory-based task specification, look very promising to tackle this problem. In these approaches, the task is described (either explicitly or implicitly) as an optimisation problem subject to a number of constraints. These constraints can be in the continuous domain [1] or also the discrete domain [2]; they can involve geometry of robot and task or can be sensor-based [3]. Some of these approaches are kinematic [1], others include a dynamic model [4]. Typically, these task specifications also involve an hierarchical optimization problem, where some constraints are considered more prioritized than others [5].

In this workshop we aim to bring together leading researchers and industrial/real-world early adopters in constraint-based programming theory, software development and applications [6]. Which paradigm shift do we need to obtain the reactivity and modularity needed to resolve this conflict? How do we reuse robot “skills” in new robot applications? What are the key missing steps/hurdles/pitfalls to bring them from a lab to the real world? How should we organize the different stakeholder roles in the development of tomorrow’s robot applications? What can we learn from early adopters?

Prospective authors are invited to submit a two-page abstract reporting on their current research and ideas that motivate discussion during the workshop. Authors of accepted work will be able to present their research as a lightning presentation and/or poster.

In this workshop, we aim to bring to the attention of the audience the following topics, all related to constraint-based programming:

“Constraint-based programming” must be considered in the wide sense of the term. For example, but not limited to:

Submission Please submit your two-page abstract using the IROS template by email to . Each submission will be reviewed by two reviewers.

Flanders Make will sponsor an award for the best contributions presented during the workshop poster session.

The workshop will consist of 1) invited talks, and 2) presentations of  contributed abstracts. We encourage participants to check the Software section. Due to the COVID-19 pandemic the workshop is held virtually.

The first industrial application of eTaSL: ultrasound inspection of fold-glue joints of car parts in a human-robot collaborative setting at Audi Brussels

Constraint-based plan transformation in a safe and usable GOLOG language

The workshop is supported by the IEEE RAS Technical Committee on Whole-Body Control.

Stack of Tasks is a C++ Software Developement Kit implementing a control architecture for redundant robots and more specifically for humanoid robots.

eTasl is a task specification language for reactive control of robot systems. It is a language that allows you to describe how your robotic system has to move and interact with sensors. This description is based on a constraint-based methodology. Everything is specified as an optimization problem subject to constraints.